With the social media hype surrounding this movie, of which Art In Motion happily perpetuated, there was no way I was going to miss seeing The Fault In Our Stars on the big screen. If I’m going to end up a blubbering mess I may as well do it with some girlfriends, two dozen strangers and a choc-top.

”That’s the thing about pain. it demands to be felt.”

Its been 3 days now since I saw TFIOS and I’m still picking the remnants of tissues from my eyelashes. I have however recovered sufficiently enough to write about a film where heart-wrenching, traumatic, and harrowing; all seem to be fitting descriptions. It was like Sophie’s Choice, Who will love My Children, Schindler’s List and The Notebook all piled on top of one another to make the Everest of sad movies. It’s any wonder I found it hard to breathe but that may have just been my blocked nose and not the oxygen levels in the atmosphere… Elevating this mountain of sorrow, feelings of being uplifted and liberated managed to find their way through the fog of loss to reach the peak of hope and joy, and an understanding that life and love; no matter how short, are things to strive for, cherish and celebrate. 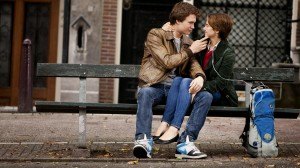 The Fault In Our Stars

Directed by Josh Boone, who has helmed just one other film (Stuck In Love), and based on the John Green novel of the same name; TFIOS is the story of Hazel and Gus, two teenagers who meet at a cancer support group and fall in love. Both are dealing with their conditions in very different ways but have a similar grasp on sarcasm that draws them together. Ansel Elgort who plays Gus, immediately grabs your attention. That first grin lures you in and you know there’s going to be mischief. I fell in love with his character instantly. Shailene Woodley shines as Hazel. Woodley has taken a typically brooding teenage girl role and magnified it by one hundred. Hazel’s matter-of-fact outlook on her doomed life is in complete contrast to Gus’ more carpe diem-YOLO perspective.

Laura Dern and Sam Tremmell play Hazel’s somewhat perfect yet tortured parents, and with their help, Gus eventually melts Hazel’s heart. Their union is the point of no return and an almost Romeo & Juliet-esque tragedy unfolds from there.

TFIOS is not without its humorous moments though. Gus’ friend Isaac is the McLovin of the group and his eye sight, or lack thereof, is a constant source of amusement. A scene involving eggs of all things had me in stitches and probably prevented me from curling up in the foetal position under my seat.

Produced on a modest 20th Century Fox budget of $12 million, and despite a front-loaded weekend, TFIOS has been profitable; grossing $163 million worldwide. It has also thrust Dern and Woodley into Oscar conversation, mine at least, with Elgort a possible dark horse as well. Its success, whilst driven initially by social media saturation, is also based on the universally felt and understood themes. Cancer doesn’t recognise geographical boundaries, political agendas or religious beliefs. Unlike the humans it ravages, it does not discriminate.

This film connects deeply with its audience, some more than others, dependant upon personal experience with this merciless affliction. There are few people in this world who have not suffered or witnessed the devastation of cancer. Family, friends, neighbours; it has become ubiquitous.

”There is only one thing in this world shittier than biting it from cancer when you’re sixteen, and that’s having a kid bite it from cancer.”

I walked away from this film appreciative of life and looking forward to the future, albeit puffy eyed and with one of those *feels*, hangover headaches. If you aren’t affected by this film then you should check for scales as there’s a good chance you may in fact be a reptile! TFIOS is a beautifully crafted story that deserves all the critical acclaim that comes its way. And I’ve no doubt it will come.

If you want to relive the *feels* the official soundtrack is available for download from iTunes and contains exclusive tracks from Ed Sheeran and Birdy. The official trailer is below.