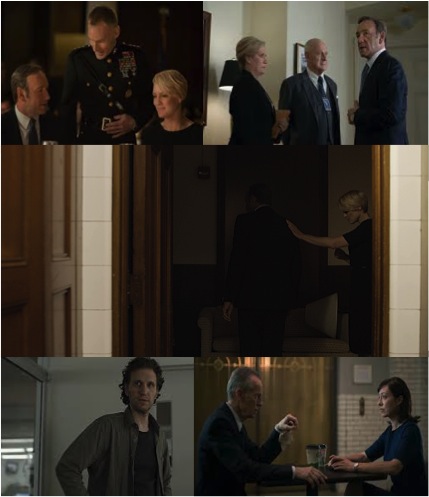 “One heart beat away from the Presidency and not a single vote cast in my name. Democracy is so overrated.”

We open House Of Cards chapter 15 with renovations of casa Underwood in full swing and news outlets headlining Frank’s “uninspiring” appointment as Vice President, while he preens himself for the quiet swearing in ceremony; which will take place amongst the chaos of buzz saws and hammering. Preening complete, Frank makes his way downstairs stopping just long enough to have his privacy bubble burst when he sees the security cameras being installed, he won’t be pushing anyone down those stairs anytime soon. Stamper is subtly interrogating Linda Vasquez (Sakina Jaffery) about Christina’s fairing as the Presidents new help, in a not so subtle attempt to keep her occupied in the wake of inquiries into Russo’s death, and you just know there will be the obligatory strings attached. In the aftermath of chapter 14 we see Lucas drowning in grief over his “Twitter twat” girlfriend. He is abandoned by Janine whose fight or flight instincts have kicked in and she can’t flap her arms quick enough to migrate anywhere Frank isn’t. In lieu of Janine, Lucas is left carrying the truth crusade torch and eventually wins the sympathy of his law enforcement source; who lets him view the train station security camera footage of the incident. As Lucas watches Zoe’s last moment of horrifying human existence, followed by her bug into the grill of a Mack truck end; he’s gutted. You can almost see his soul shrivelling up in front of you. It’s a brilliant, pure and tortured performance by Sebastian Arcelus; who even gets the gentle rock on that people in shock sometimes do. I didn’t feel for any of the characters this season as much as I did for Lucas in that moment. Despite the footage supporting the Police finding of accidental death, Lucas, far from convinced; enlists the help of former Washington Post boss Tom “The Hammer” Hammerschmidt (Boris McGiver), whose most memorable moment of season 1 was informing Zoe that she was a repository for the male reproductive organ. Classy. Tom, looking a little worse for wear since being cast out of the paper, and with a six pack of beer (the preverbal all-purpose thirst quencher & problem solver), visits Lucas at work. For the second time Lucas doesn’t get the support he craves for his conspiracy theory. Back at Pennsylvania Avenue, the battle between the Whip candidates heats up and tensions grow between Frank and Tusk; the sparring becomes more vigorous. In one of the lighter moments so far there’s a particularly humorous awkward moment of expectant silence between Frank, Tusk and the Secretary of State that had me chuckling to myself; we’ve all been there. They exchange jabs down the telephone line over back-channeling the Chinese, with Frank playing the President off against his long time billionaire, bird watching (yawn) confidant; although I prefer him for a puppeteer. Meanwhile Frank is pulling a Geppetto of his own on Secretary of State, Catherine Durant (Jayne Atkinson), in his subterfuge of Tusk and the President over the Cyber-espionage sub-plot with the Chinese, while Jackie is busy setting her own table for a course of congressman hide; medium rare.

“Cathy, if you don’t like how the table is set, turn over the table.”

There’s a new thread woven into the fabric of Claire Underwood in this chapter that reveals as much about Frank as it does about Claire’s past. Claire is to accompany Frank on his first public engagement as Veep, dishing out stars to newly commissioned Marine Officers. As Claire’s assistant reads out the recipient list Claire becomes almost disorientated when one name comes up. The name is General Dalton McGinnis and he’s to be promoted to Commander U.S. Strategic Core. Claire discloses to her assistant that they went to college together and quickly moves on with the business of the day, which also happens to be the first time we hear Conner Ellis’ name; he’s on a short list of candidates to become Claire’s spin-doctor; more on him later. I thought the McGinnis thing would lead to a story arc of ‘the one that got away’, the first love, blah blah blah and cause friction between the Underwood’s. I would be wrong (Strike 1). All seems to be going well at Frank’s inaugural outing until Cmdr McGinnis, all chest and ribbons to match, avails himself at the Underwood’s table. McGinnis rejects Claire’s outstretched hand and instead lunges in with a kiss which does not go unnoticed by Frank. (I clear my throat. Awkward…) None the less Frank’s attention to the overly familiar greeting is fleeting once their five minute Harvard relationship is divulged, and Frank returns to his very informative breakdown of the three major crop yields in his home state. A short moment later Claire takes her leave looking rattled. Frank doesn’t miss a beat and he also excuses himself. In typical Frank fashion he has little regard for social etiquette, sends the Secret Service agent packing; and joins Claire in the ladies room. Claire, visibly distressed, tells Frank “it was him”, “Freshman year.” Frank seems to know exactly what ‘event’ Claire is referring to (my mind is running scenarios and narrows it down to one) but he’s apparently been blissfully unaware of who the perpetrator was all these years. The ‘who’, has just been identified as McGinnis. It’s a revelation that unhinges Frank, enraged he sets out for McGinnis; nice knowing you McGinnis, you’re probably about to wish you died as quickly as Zoe Barnes. Claire reigns Frank in before he passes the point of no return, working frantically to placate him and stop him from disembowelling McGinnis, consequently derailing their push to the top in the process. It’s a genuine moment and the first time we see spontaneous, reckless anger from Frank where there has been no real lead in; he’s been blind-sided before but he’s in the passenger seat this time, watching Claire take the full impact. There’s little doubt that had Frank escaped the ladies room it was going to be a blood bath. A persistent knocking on the door by the Secret Service Agent is a fortuitous distraction and Frank has to redirect his agitation. Spacey does well here, both in believability and managing overlapping dialogue between Wright and the soon to be redeployed Agent at the door. The crafty camera work lends some weight to Spacey’s aggressive posture and he cuts a formidable looking figure, one capable of punching you in the face for a change instead of stabbing you in the back. Claire is finally able to bring Frank to heel but not before he attempts to satiate himself by inflicting grievous bodily harm on a lamp. As you can imagine during the star ceremony Frank radiated residual heat towards McGinnis with a fixated, unblinking stare that would have caused most of us to spontaneously combust. Those stars may as well have been daggers Frank was driving down through the Commander’s clavicles.

When the Underwood’s arrive home later in the evening Frank takes a gentle tone with Claire, one we’ve only heard a few times previously. He does have the emotional capacity to actually care about this woman in isolation from the empire. Again I berate myself for being drawn in by this show of compassion. When he is shut out by Claire who retires to bed, Frank mopes around the townhouse, practically dragging his knuckles from the demoralised slouch he’s adopted; restless and lacking in purpose for the first time since chapter 1. He finds no solace in the online virtual butchery of his Playstation due to the connections not being secure, and is left equally unsatisfied with his proxy vice; a vapour cigarette. I wonder how long his “addiction without the consequences” will last. Defeated, Frank finally goes upstairs. Still awake, Claire recollects details of the rape (Hah! I knew it!) to Frank, who just listens. Claire’s confrontation with her past goes someway towards explaining her icy demeanour, even in this raw state she might as well be standing behind bullet proof glass; insulated. The weight of the reveal is too much for Frank, when he informs Claire he won’t be able to sleep, he is sedately banished back downstairs, “You’ll still feel the hate in the morning, you’ll use that, but not on him.” I’m struck by the range of emotions Claire can elicit from Frank, like the tides affected by the moon, Claire can push and pull Frank at will. Is Claire Frank’s achilles heel? The gap in the armour? In the absence of any intimate moments, it’s difficult to get a handle on the touch-point between these two, it goes far beyond the biology of symbiosis, but how far; and to what end? These two intrigue me.

“I strangle her Francis, so she doesn’t strangle me. I have to. We have to. The alternative is unliveable.

Lucas commences his extracurricular deep-net exploration in light of the Chinese Cyber-espionage controversy, seeing an opportunity to contract a hacker in order to get hold of Frank’s cell phone logs. Lucas, I feel for you buddy but you don’t mess with National Security, this is destined to end in tears. Frank’s reshaping of the President like a lump of plasticine has paid off with a show of strength against China, a backflip that sends Tusk into a tailspin. Jackie, doing her best Frank impersonation, is trying to divide and conquer the other two Whip candidates of Webb and Buchwalter in the interest of self promotion. Her only bargaining chip is the very man responsible for her career and long time friend, Congressman Ted Havemeyer; so Jackie seeks Frank’s counsel to find an alternative. When Frank is not forthcoming with one, Jackie’s desire to move up wins out, and she deftly drops the axe on Ted. Jackie exposes an old affair and the subsequent, hidden, offspring; a daughter with cerebral palsy. “I hate myself, but I’ll get over it.” Damn! I need my sweater from chapter 14, that’s below zero. Can you imagine Jackie and Claire teaming up together? What was that movie about the two lions that hunted and ate humans for fun? The Ghost and the Darkness, that’s it! That would be them. Jackie must have left her conscience behind in Frank’s office, occupational hazard I think, he probably keeps them in a draw and feeds them to a snake or something. Be careful what you create Frank. At the close of the chapter the Underwood’s are home and for the first time since the renovations, the townhouse is eerily quiet…

“We have our fortress now.”