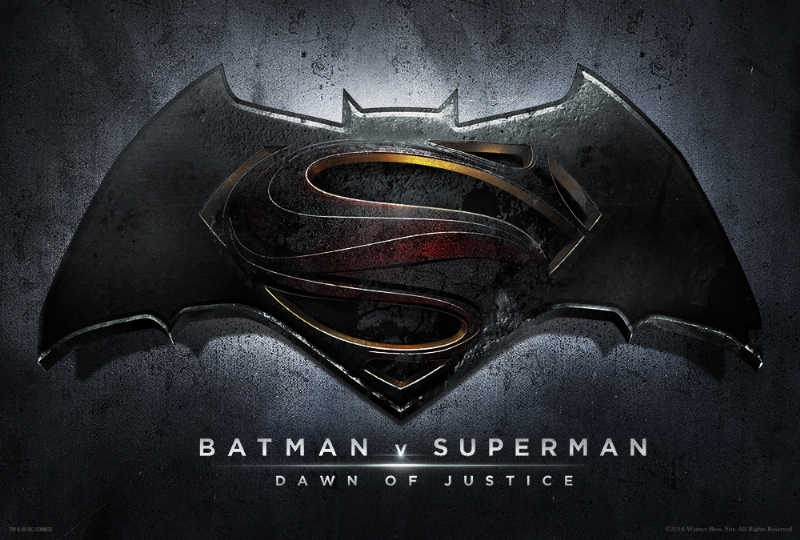 Zack Snyder’s Man of Steel sequel has finally been bestowed with a title – Batman v Superman: Dawn Of Justice. The logo was also released and has a Dark Noir vibe to it.

The shoot has officially started Stateside in Michigan, with other locations to include Africa and the South Pacific, before a worldwide release date of May 6, 2016.

The film boasts a stellar cast that would not look out of place in the front row of the Oscars. In fact, the credit list can lay claim to a total fifteen Oscar nominations for four wins. Ben Affleck, a.k.a Batfleck, leads the way with two statues under his bat-belt. Henry Cavill, Amy Adams, Laurence Fishburne and Diane Lane all reprise their roles from the Man Of Steel.

The fresh faces include Gal Gadot as Wonder Woman and Jeremy Irons as Alfred. Holly Hunter will appear in the film but her character is yet to be revealed. A controversial casting, second to Affleck of course, is that of Jesse Eisenberg; who will step into the role of the villainous Lex Luthor. Much has been made of his selection however, Art In Motion is happy to go on record in support of Eisenberg, we think it’s a bold and inspired choice. He gave a masterful turn in The Social Network and will be the surprise packet of this comic book blockbuster. The critical acclaim is not exclusive to the cast either with the film penned by Chris Terrio who picked up an Oscar for his work on Argo.

Snyder has also signed on to make a Justice League movie which this could be a prelude to even though plot details are yet to be disclosed. It’s expected that most of the cast will be on board for that instalment as well.

So this pulse film could go one of two ways: Godzilla proportions success or The Lone Ranger face plant. We’ll go out on a limb early and back the former. Curiosity alone should ensure a record breaking opening weekend. So if you’re a Superhero fan or just have a morbid fascination with seeing Batfleck in leather then this will be a film not to miss on the big screen.