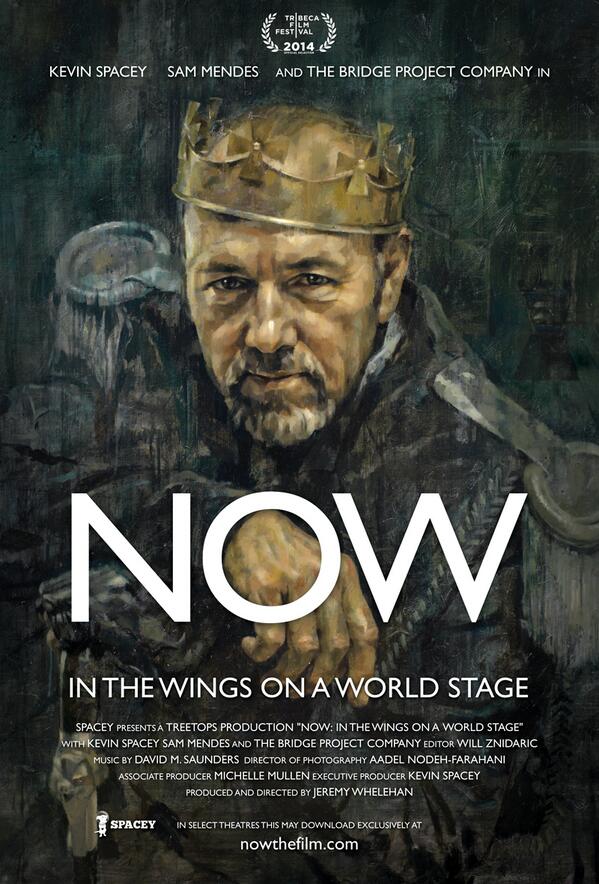 NOW: In The Wings On A World Stage

“Now is the winter of our discontent…”

Yes, yes it is. After waiting for what felt like an eternity, my copy of NOW: In The Wings On A World Stage was finally made available for download from kevinspacey.com on 2 May. But selection of the 1080p download version, meant eternity was about to get a little bit longer, the irony of the unexpected cold snap that set in just a few hours earlier was not lost on me either.

For the past couple of weeks I’ve been tormented, teased and titillated by my colleagues in the northern hemisphere as, one by one, they attended the various live screenings and Q&A sessions used to launch Kevin Spacey’s (House Of Cards) documentary film about a theatre company’s 10 month world tour. A tour that would span three continents and twelve cities for a grand total of 200 performances of Shakespeare’s Richard III. So what’s it like to be part of such a mammoth production? This film is going to tell me. The social media machine has been churning out promotional material and reviews in equal proportions, and some savvy marketing by Spacey himself has ensured his self distributed venture has received plenty of coverage, and kept his reputation for being “disruptive” in tact. The flagship launch was the Tribeca Film Festival no less, very savvy indeed.

As my download nears completion, I make myself a therapeutic hot drink, don my favourite hoodie, and assume the position in front of my 52” television for full effect. It’s my turn, winter is over, or at least locked outside and I can now see for myself what my friends have been swooning about and I’ve been restlessly waiting for. My expectations are high, a sudden wave of anxiety washes over me, what if it doesn’t live up to the hype? But this is a Kevin Spacey film, he IS performance art and never disappoints, so I remind myself I’m not launching ground-to-air missiles; and press the play button!

“The sense of anticipation, it’s like feeling the heart beat of the world.”

The film opens on a group of limestone steps and slowly pans out to reveal the spectacular Epidaurus Theatre in Greece, the most famous theatre in the world. With a seating capacity of between 13 and 15 thousand and acoustics that scientists have marvelled over for decades, I get a feel for the scale of the play and the ambitiousness of the company’s tour. This isn’t just any play and this isn’t just any company, this is Richard III and this is The Bridge Project Company, led by a man as driven as the protagonist he plays. There’s a stunning time lapse sequence which tracks the setting sun over the amphitheatre and a montage of preparations for the Epidaurus performance with narration by Director Sam Mendes (Skyfall). This is the first time Mendes and Spacey have collaborated since 1999 with Academy Award winning American Beauty, which was Mendes feature film directorial debut, like Spacey; Mendes was a student of theatre before the call of the celluloid. I find myself wondering why they haven’t teamed up more often a la DiCaprio and Scorsese, I hold onto hope that Mendes will bring Spacey in as the penulitimate baddie for Bond 25, but I digress…

The scene is set, you can almost see the energy of the audience cascading down the steps, funnelled to the waiting stage. For the company members who had never left home shores before now, the anticipation must have been palpable. So with the blessing of the Gods, their journey was about to begin and the world really was to be their stage. I exhale, the last of my anxiety subsides. Fade to black. 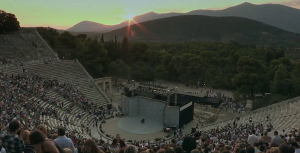 With the prologue out of the way we move into NOW proper. First up we discover the origins of the company, meet the cast, and work our way through 6 weeks of rehearsal at The Old Vic in London. The Bridge Project Company, was a trans-atlantic venture, bringing together British and American actors to perform classical work, in this case; Shakespeare’s Richard III. With the Bards work thought to be the exclusive domain of the British, this was to be an experiment of sorts to see if artistic passion and a modern reinterpretation, could transcend a geographic divide and beguile a global generation of millennial pulse film fiends.

The company’s membership is eclectic, there’s a cacophony of regionalism amongst the 20 strong cast. The ages, experience and backgrounds, are as varied as one of Forrest Gump’s boxes of chocolate. Many, like Andrew Long and Gemma Jones, are performing arts veterans; while for others this will be their first major foray into “blockbuster theatre” as it was coined by Bruce Gutherie, the production’s Associate Director. Some are old Shakespearean hands, while many including Spacey himself, have had limited exposure to bringing the pre-eminent dramatists extant works to life. Over the course of the film, many will recount their personal journey, their connection to theatre; why they do it, their desires and their struggles. For now, they spend 6 weeks getting to know each other, as individuals and as a company, exploring the text and developing their characters, “falling over and getting back up again”.

The rehearsal period is fascinatingly insightful. Mendes reveals an introverted side I wasn’t expecting by disclosing a fear of addressing large groups, while Spacey discusses the psychology of a character with a deformity, what he surmises informs his portrayal of Richard III. The production is physically and mentally challenging long before the first lines are ever uttered to an audience, be it Spacey coming to terms with a deformed gait he will have to carry through 200 performances and then some, or a young actress trying to find the right level of sexual tension and voice pitch to make herself believe in her character so that others will as well. You see, it’s not just about remembering lines, it’s about understanding what the character is saying and the context in which it is being said. Rehearsal allows the actors to build and create, unlike a movie, the actor owns the stage and the character when the curtain raises; nobody gets to call “cut!”. This is theatre, it is immediate, and it is NOW.

After six weeks of sell out performances at The Old Vic Theatre in London, it’s time to get the show on the road. The film takes us from the lap of the Gods at Epidaurus, to Istanbul and Naples, San Francisco, Beijing, Sydney and Doha; the curtain finally falls in Brooklyn, New York . Friendships develop, the travel bug bites and the logistics of the production come to light.

As the company makes its way around the world we’re treated to its wonders, the beauty, the mystery; it’s a veritable cultural feast and “spiritual catharsis” for some members. There are a few indulgences but there’s a reason for it, there always is with Spacey. I equate seeing him in anything other than a measured, self aware state, like finding a unicorn in a paddock of four leaf clovers. Jeremy Bobb, one of the American contingent who plays Catesby, manages to put the experience into an every-day-man perspective. At one point I think he even out f*bombs Spacey, which is likely to have been more of a challenge than the doing the play, given Spacey’s penchant for profanity. It’s Bobb’s quips and observations that give the rough edge to this romanticised gem.

But there are glimpses of the not so glamorous for anyone who cares to pay attention. There are cramped dressing rooms where the unappetising aluminium hot-box meal containers can be seen to litter the scant space, frenetic backstage mechanics, the physicality of the play itself; and the mental and physical drain resulting from sleepless nights in a hotel undergoing renovation. When you’re performing for three hours a day, weeks and months at a time; throw in more than just a few long haul flights and the homesickness that almost always sets in regardless of what wonderful place you’re in, this was not a tour to be scoffed at. But it’s all part of the experience that is taking a large scale theatrical production on an international tour. 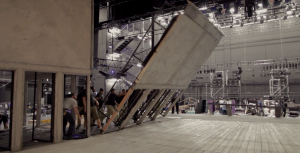 NOW: Sets on the move

”I wanted us to share more than just the stage.”

With four sets on the move around the globe at any given time and timeframes tighter than Spacey’s hunch-back bodysuit, the logistics for the production would have been worthy of their own film. The amount of effort in moving, constructing then deconstructing and again moving the world of Richard III, looked exhausting without ever being privy to all the mechanics involved. There’s only so much you can cram into a ninety minute film but the thought of lugging those sets down long, narrow, corridors in Naples was enough for my back to start going out in sympathy. With a new backstage crew in each city to be trained and rehearsed, managing behind-the-scenes must have been as gruelling as everything happening on stage.

It’s not just the crew that changes at every port, we learn that the audiences engage differently as well, whether it’s through intense concentration or animated participation. All however enjoy being co-conspirators through the device of direct address, Spacey’s charisma is intoxicating and he has the ability to develop an immediate rapport with the audience, despite playing a murderous dictator.

I have to make special mention of the musical score here as well because it was perfect. It was a well paced accompaniment to the narrative and matched the tone of each destination so that I felt I was getting the full cultural experience as the company would have been. 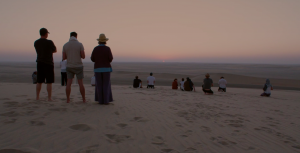 There are so many insights, hilarity, “corpsing” and precious little moments in this film that can’t and shouldn’t be revealed here.  The film, like the play, like theatre; needs to be discovered by the individual watching. I personally feel like I’ve just had a deeply religious experience. If I’d seen this sort of film when I was staring down the barrel of my tertiary education and agonising over having a “real job”, or following my creative dreams into perpetual “unemployment”, according to a wise and gainfully employed elder statesman of my family; I’d have chosen the latter without question. The production itself was an amazing achievement for The Bridge Project Company. This film, is a credit to Spacey’s determination to ensure that theatre, not only survives; but thrives. He has provided us with an opportunity to go behind the curtain and understand why theatre means so much to performers known affectionately as “theatre rats”. *Applause*