The VIBE XIX Dance Competition has krumped, popped and locked it’s way into becoming a premiere hip hop showcase extravaganza. Founded in 1994, it is the longest running hip hop dance competition in the world. In partnership with Culture Shock LA, the collaboration also provides support to community youth programs. Held annually in California it continues to grow in popularity and competitor standards. This year was no exception. The 2014 venue, Segerstrom Hall, Costa Mesa, drew a capacity crowd who bore witness to the dance spectacular earlier this year. 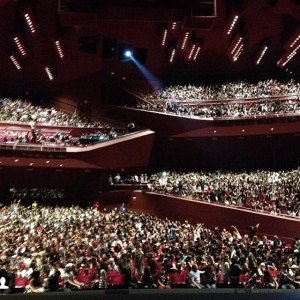 The fluid, synchronistic movement of the second placed team, The Company, made it difficult to comprehend a better performance on the night. If they were any smoother, they’d have slipped right off the stage and into the laps of the front row. Company can take solace in the fact their YouTube video has clocked up over 1 million hits. That’s more than the winning crew.

It was however a brilliant routine by Academy of Villains’ which would catch the judges eye. In traditional fashion their theme would be slightly morbid and incorporated a variety of performance art techniques. To that end, they would be crowned champions of VIBE XIX 2014. Villains already had pedigree, they were the Hip Hop International Champions of 2012 and America’s Got Talent Semi-finalists the same year. At the time of publishing this article Villains were performing on So You Think You Can Dance.

What these guys and girls do with their collective energy, their range of movement and the frenetic pace at which they write this poetry in motion, is spellbinding. You simply have to see it to believe it.

We’ve included clips of the top two placed teams from this years competition below. Whatever you do, don’t blink, there’s so much happening in these routines there’s a lifetime of dance in a heartbeat. It will blow you away.