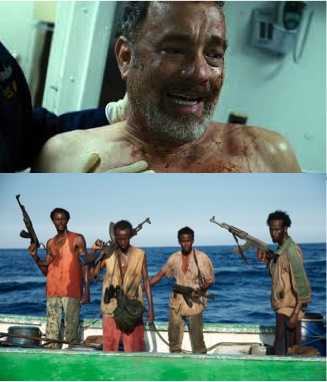 If you missed seeing Captain Phillips on the big screen then you missed an extraordinary performance by Tom Hanks (Saving Private Ryan, Charlie Wilson’s War) in a gripping, true story, of high seas piracy; courage and desperation. So you’ll be pleased to know the Australian Blu-ray and DVD release is set for 6 March, which is not too far away. I was fortunate enough to see an advanced screening of the movie late last year and was blown away by it, so much so that I had to Facebook my thoughts and tag producer Dana Brunetti (The Social Network & House of Cards) while the end credits were still rolling; which was responded to with a ‘Like’ and induced an air fist pumping episode from me. I can assure you the hype surrounding this flick was absolutely validated. So, in support of the upcoming DVD release (I pre-ordered my copy over a month ago) I thought it timely to do a quick recap, particularly since the film has been nominated for Best Picture at this years 86th Academy Awards to be held on 2 March or 3 March for us Aussies; this is why it received the nomination…

Imagine a tin can sinking silently, blindly, with a hypnotic pendulum motion through liquid darkness. Imagine you’re inside that can, on a collision course with oblivion, helpless, scared; and alone. The pressure building incrementally until the imminent, unwitnessed and violent demonstration of physics takes place. The can will Implode. Crushed. No longer recognisable as the cylindrical vessel purposefully transporting a precious cargo. That state of hyperventilation you might be experiencing on the way down, that’s the perpetual feeling I had from about 20 minutes into this movie until the last moments; then I just wanted to climb into the screen, hug Tom Hanks and have a good cry.

“They’re not here to fish.”

Director Paul Greengrass (Bourne Ultimatum & Bourne Supremacy) has successfully managed to portray both sides of this geopolitical life and death struggle, that follows a group of haunting looking Somali pirates, as they bite off a little more than they can chew when they attempt to hijack the Maersk Alabama; a container ship bound for Mombasa. What ensues is nothing short of terrifying as the pirates and crew play cat and mouse within the bowls of the superstructure. When Captain Richard Phillips (Tom Hanks) ends up on the ships 28 foot life boat with the pirates, that’s when my anxiety really kicked in, the cinematography was masterful and claustrophobia became a very realistic concern. The last 20 minutes was very nearly the end of me when I realised I was holding my breath! I felt like I was right there riding every wave, I could almost taste the salty sea spray and feel the heavy; stale air, close in around me as I waited for it all to end. Even with the Navy SEALs (SEAL Team Six to be precise) dropping in, I still expected a traumatic outcome.

Tom Hanks performance in the last 10 minutes alone should have seen him take home a tidy haul of awards. His omission from most of the awards season has baffled fans and critics alike but on the bright side, Barkhad Abdi was a revelation in his film debut as Muse, the head of the very convincing pirate gang; and worthy of his own accolades. Barkhad did pick up the BAFTA for Best Supporting Actor while Billy Ray (Hunger Games) took out the Best Adapted Screenplay award from the Writers Guild of America. The screenplay was adapted form the book A Captain’s Duty: Somali Pirates, Navy SEALs, and Dangerous Days at Sea, co-written by Captain Richard Phillips about his 2009 hijacking experience. The film was also named Movie of the Year by the AFI and has a total of 6 Academy Award nominations tomorrow. In closing, Captain Phillips is an epic, action packed, thriller with an ending that will affect you deeply; and leave you feeling like you’ve been pummelled by rogue waves for an entire Deadliest Catch season with a gun to your head the whole time!