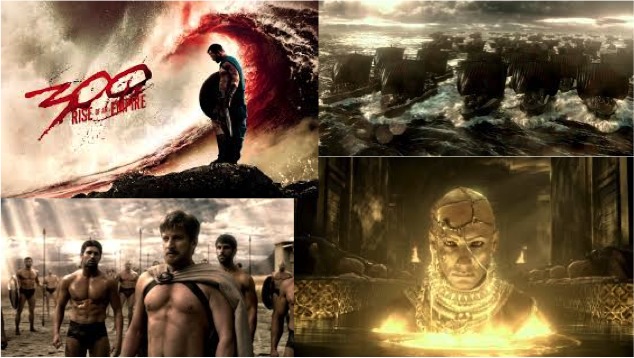 “We chose to die on our feet, rather than live on our knees!”

I’ve had the debate, I’ve trawled the comments and I’ve brushed up on my history. For those who know the story of the first and second Persian Wars 480 – 490 BC, and know it well, you may be disappointed that this latest instalment is not entirely accurate. But it’s still a damn good movie and if you know nothing of the history but like the genre, SFX or are just into the gore; you’re going to love this film. It features a host of actors from the small screen juggernaut Game Of Thrones and the Spartacus anthology, with quite a few Australian names top billing; even our own David Wenham’s abdominal muscles reprise their role as the only survivor of the original 300. I went and saw it in 3D which only enhanced the experience but I did keep checking to make sure I didn’t have any blood on me after each brutal exchange.

Rise of an Empire is a combination of prequel and sequel to the 300 film released back in 2006. Directed by Zack Snyder (Man of Steel) it uses narration and cut-ins from the first 300 to bring you up to speed and progress to the crux of this versions narrative quickly. It blends fairly seamlessly and there’s no confusion as the two storylines run concurrently for a period. Without delving into a convoluted history lesson here, the basic premise of the film is the Greek fight against annihilation at the hands of the Persian war machine. The Persian Navy is lead by Artemisia, played by Eva Green (Casino Royale) who is bent on avenging the death of King Darius. Darius was slain by Athenian General Themistocles, played by Sullivan Stapleton (Gangster Squad & Animal Kingdom) who became a hero, but it was his decision not to kill King Darius’s son that would come back to haunt him. You see Artemisia is actually Greek and, as a result of the one thing that can’t be argued about the history of the time, Greek infighting; her family was slaughtered by rival Greeks and she herself was raped and held captive. It would be a Persian Emissary that would find and raise Artemisia, under his care she would find her inner sociopath and Persian King Daruis’s favour. When King Darius is killed, Artemisia is driven by vengeance and will use his son, Xerxes, played by Rodrigo Santoro (300 & What to Expect When You’re Expecting) to destroy the Greeks.

After the death of King Darius, Artemisia sows the seed in Xerxes that only a God can defeat the Athenians. A meek and distraught Xerxes is sent packing by Artemisia into the desert and, near death, he stumbles across an exclusive hole-in-the-wall day spa where he is transformed into the very luminous “God King”. The “God King” emerges from the desert, looking as though he’s been rolling around in honey dust, and sets off to slaughter the 300 Spartans. I kept waiting for a flock of honey suckle birds to descend and lick him to death every time I saw him, at first I thought the things flying around the screen were just there to emphasis the 3D effect, but it could have been a swarm of bees they couldn’t shake from the set; obviously attracted to the scent of honey. Shiny surfaces aside, Xerxes plays the figure head and empowers Artemisia to indulge in her vengeful game with Themistocles. When Artemisia starts to run short on cannon fodder, and patience, she changes tactics and tries to employ Themistocles; with an offer of more than just world domination. When Themistocles gives in to his base desires the two go at it like lions, apparently the threat of violence is all the foreplay they needed and they set to throwing each other around roughly indeed! But it’s coitus interruptus when Themistocles still says no to joining the dark side, awkward…

Themistocles pays Queen Gorgo, played by Lena Headey (Game of Thrones), another visit knowing that if Greece is to survive the wrath of Artemisia now, they will need Sparta to come to the party. Themistocles is greeted first by Dilios, reprised by David Wenham (300 & Lord of the Rings) and looking worse for wear as the only surviving member of the 300 Spartans. The Queen is mourning the loss of the 300, in particular King Leonidas, and is not receptive to the idea of serving up more Spartans to Themistocles’ cause. As Themistocles sets to depart, he presents Queen Gorgo with King Leonidas weapon which he was given by the hunchback that betrayed the 300; “avenge him”. Well played that man! We’ll be seeing the Queen later I’m sure.

In an “all in” last pitched battle, Artemisia and Themistocles will collide in a flurry of sea spray, abdominal and pectoral muscles, and as much gratuitous violence as three seasons of Spartacus combined! I would love to have seen the storyboarding for the final scene alone, the movement and flow of action, the choreography of the fighting; and a horse! I’m not one for films that rely solely on their SFX but this was something to behold. The SFX propels the story rather than overshadowing it, the slow motion sequences and close ups of death blows; pure, exhilarating, entertainment. Artemisia takes a parting swipe at Themistocles “you fight harder than you f**k” which is not emasculating at all… With Queen Gorgo’s armada of ships on the horizon bearing down to join the fight, Themistocles finally decides it’s easier to dispatch Artemisia than get a restraining order. But the “God King” remains at large and the door is left open for another instalment. I can’t imagine it will be too difficult for Themistocles and Queen Gorgo to find him though, just follow the trail of glitter!