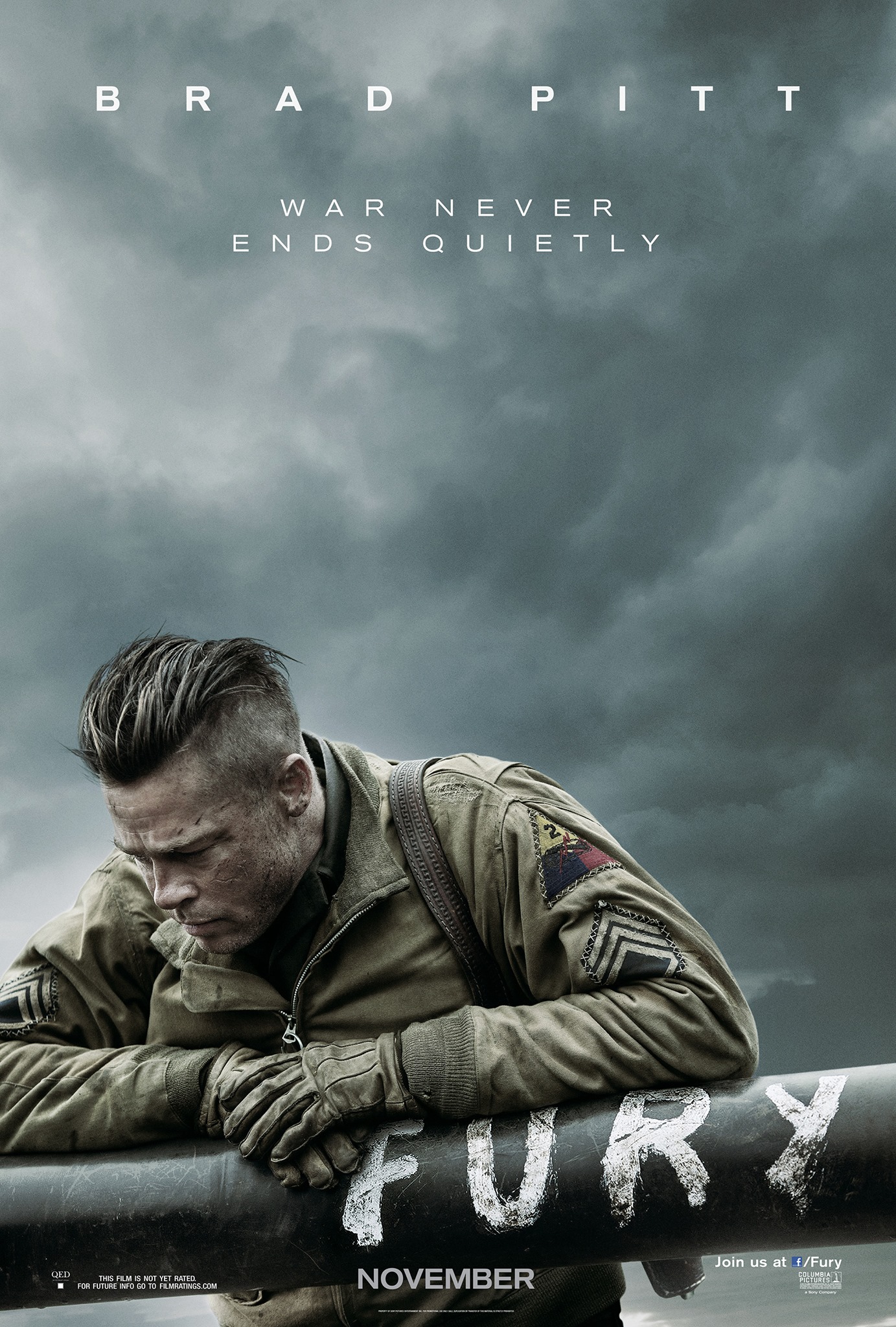 Fury is without doubt, the most authentic WWII film ever produced and with war films traditionally performing well at the Oscars, Fury could be the biggest threat to 2015 Best Picture frontrunner; Birdman.

“Ideals are peaceful. History is violent.”

The story follows a five man Sherman Tank crew as they push into Nazi Germany in April 1945. Despite the war coming to an end and having already survived a campaign in Africa the crew, lead by their battle hardened Staff Sergeant, Wardaddy, played by Brad Pitt (Inglorious Basterds, World War Z); rumble forward into the jaws of Nazi resistance. Those jaws could exert serious pressure and they did so in the form of Waffen SS and a Panzer Division Tiger I. The Tiger I was the most formidable tank of the war and of course the Waffen SS were the infamous armed wing of the Nazi Party’s Schutzstaffel (SS, “Protective Squadron”). To say our ragged and morally questionable group of allied troops were up against it is an understatement and the casualty rate soars.

I knew I was watching something special from the first scene, it was equal to that of Saving Private Ryan for sheer brutality, if not scale. That one scene is the manifestation of mans most primitive survival instinct: Kill or be killed. The tone, the scene, and the standard for authenticity are now set.

Under the watchful eye of Military Advisor David “Sting” Rae, Director David Ayer takes the military genre to a whole new level of authenticity. I can hear every Saving Private Ryan fan scoffing from all the way down here in Australia, but I can assure you it is absolutely the case. With tank movies notoriously difficult to make due to their claustrophobic nature, the problem has always been compounded by inaccuracies in the equipment used, and it has been the downfall of most of Fury’s predecessors. So why is Fury different? Well, because Brad Pitt must have used his abundant and irresistible charm to convince the Bovington Tank Museum to permit them to use the only fully operational Tiger I in existence. Tank #131 in the film. Then there’s the rigorous “boot camp” and tank training the cast was put through, minimal use of computer generated images (CGI) which meant they really were using all the gear, and sound editing that literally blew me away. Now you’ve got an experience that you can see, hear and feel.

The one thing that stood out most in this movie for me is the fact that our “heroes” were not portrayed in typical heroic fashion. At the conclusion of one battle there’s a particularly disturbing scene which can’t be dressed up to be anything other than a war crime. But it was almost refreshing to note it wasn’t a German committing it. I felt liberated in its acknowledgment that the allied forces have demons of their own to wrestle with. It brought to mind General Dwight Eisenhower’s comments in Paris in February of 1945: ”Our primary purpose is destruction of as many Germans as possible. I expect to destroy every German west of the Rhine and within that area in which we are attacking.” And so the relevant excuses are made and the war goes on.

The status quo is reinstated in the third act and it’s heroics galore as our crew makes their last stand. It’s powerful and Pitt’s turn is commendable although I think Shia Labeouf had the standout performance. Labeouf is a very real chance for an Oscar nod of his own.

I stayed until the end credits rolled as I usually do and was pleasantly surprised, and gripped, by what I saw. There’s as much effort gone in here as in the opening credits of Seven. For those of you who watch the DVD audio commentaries you’ll often hear Directors talk about their opening credit sequences and how they use them to set the scene or provide background information, it’s all about time efficient in the actual feature. Most do nothing at all with end credits except show out-takes or bow a song from the B-side, but Fury has heavily invested in the last five minutes with a hypnotic blood red WWII media montage. Nice touch!

To date Fury has pocketed a respectable $77 million and is holding down fifth spot at the Box Office Stateside. With Interstellar blowing up the BO and the latest Hunger Games instalment set to break all kinds of records, Fury won’t be memorable in terms of earnings, but it should find its way to Dolby Theatre in February 2015. This is a big screen movie so if you haven’t caught it yet, make the effort, it’s worth the price of admission.